Métis students studying at the University of Calgary can now access $60,000 in new scholarship opportunities annually, thanks to the Métis Education Foundation and their establishment of a $750,000 endowment.

The endowment is a testament to the Métis Education Foundation, its affiliate, the Rupertsland Institute, and their parent organization, the Métis Nation of Alberta, for their advocacy and support of Métis students pursuing post-secondary education.

“The Métis Education Foundation began in 1991 with $60,000, and today we now have endowments at nine post-secondary institutions totaling $13.5 million,” says Audrey Poitras, president, Métis Nation of Alberta. “The creation of Métis-specific endowment programs are investments in the future of the people that make up the Métis Nation in this province.”

Dru Marshall, provost and vice-president (academic) at the University of Calgary, shares this commitment with Métis students.

“Both the University of Calgary and the Métis Education Foundation believe strongly in supporting student success,” she says. “We are proud of this partnership and of the resulting impact it will have on positively enhancing the academic and student experience for our current and future Métis students.”

The university’s First Nations Student Association Chief Gregory John – also a fourth-year finance student in the Haskayne School of Business – believes this is an important advancement for Métis students.

“Having access to major scholarships will empower Métis students to become ambassadors for our rich culture and serve our community well into the future,” he says.

The endowment will create new entrance awards, continuing student undergraduate scholarships and graduate awards. This adds to the numerous programs –such as student advising, academic outreach and cultural enrichment services – that are already in place and currently run through The Native Centre to support the success of Aboriginal students. 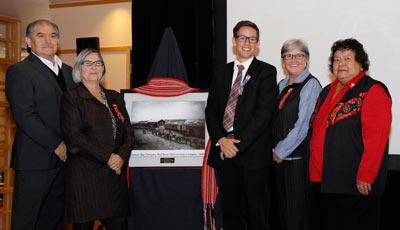