Alberta Métis Youth experienced a first-hand lesson in governance this past weekend by presenting a general resolution before the Métis Nation of Alberta General Assembly to create a Métis Youth Council. The resolution was a direct result of lessons learned and a passionate discussion during Friday’s Rupertsland Institute 2015 Métis Youth Gathering.

On Friday, youth were invited to participate in the 2015 Métis Youth Gathering presented by Rupertsland Institute. Youth were provided with an opportunity to build leadership skills, learn about employment opportunities, find out how they could participate in Métis governance, as well as find out more about the Rupertsland Institute programs and services available to them.

Hosted by Métis singer and actor Andrea Menard, attendees heard presentations from Brian Calliou of the Banff Centre of Management, and Shalene Jobin and Kirsten Lindquist from the University of Alberta Faculty of Native Studies. Brian Calliou’s presentation on Leadership brought a greater understanding of what leadership is, how it is studied and what the Indigenous perspective of leadership is. Shalene and Kirsten’s Governance Presentation gave a general understanding of Indigenous Governance concepts and models, as well as historical examples of Métis Governance and the shaping of the governance structure of the Métis Nation of Alberta. Examples of Métis leadership were also on display in a panel featuring MNA Senior Executive Officer, Aaron Barner, NDP MLA ,Trevor Horne and MNA President Audrey Poitras.

The event proposed to build the foundation for the next generation of Métis leaders and that promise was fulfilled with a call from the attendees for a Métis Youth Council. At the end of the days’ presentations and activities, youth in attendance wondered aloud how they could create a youth conference.  With guidance from the speakers, they agreed to present a general resolution to the MNA General Assembly.  On Saturday afternoon, with assistance from Shalene, Kirsten and staff from the MNA and Rupertsland Institute, the youth drafted their resolution.  Later that day it was presented to the MNA General Assembly, moved by one of the youth and seconded by President Poitras.  The resolution was passed unanimously, giving the youth in attendance a taste of direct governance and paving the way for a Métis Youth Council in Alberta. 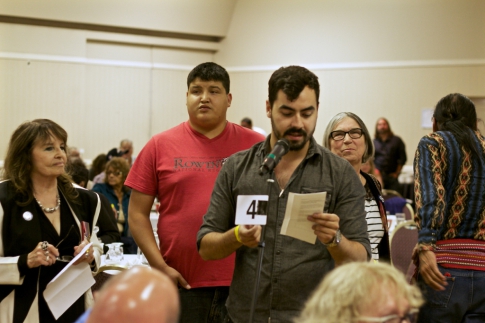