Métis Nation of Alberta President (MNA), Audrey Poitras and Métis Nation of Ontario President (MNO), Gary Lipinksi were present at the College of Alberta School Superintendents (CASS) First Nations, Métis and Inuit (FNMI) Education Symposium, which kicked off last night in Edmonton. The symposium runs until Friday and will bring together industry experts in education for discussions surrounding the state of FNMI education. Wednesday night keynote speakers included Ms. Heather Sweet, MLA for Edmonton-Manning; Gary Lipinski, MNO President and Chief Tony Alexis, Grand Chief, Confederacy of Treaty No. 6. MNA President Audrey Poitras stated that “the Métis Nation of Alberta’s educational institution, Rupertsland Institute, is very pleased to be part of this significant event that addresses education opportunities for Métis students. It is important that we work together with the community to close the education achievement gap between Aboriginal and non-Aboriginal students.”

The MNA hopes that its presence at the symposium will put Métis students on the radar. The symposium will include a presentation by Guido Contreras from the Rupertsland Institute (RLI) and Dr. Yvonne Poitras Pratt from the University of Calgary titled Finding the ‘M’ in FNMI Education. It is a discussion that promotes the need for Métis-specific educational programming using data from the 2014 study Métis Education in Alberta: K-12 Policy Discussion Paper. 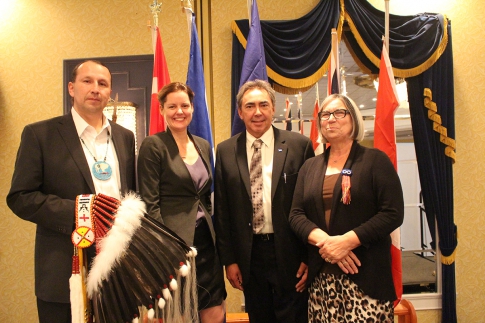