David Andre Boisvert, 66 years of age, beloved husband of Deanna (LaJambe) and uncle of Brooke passed away August 9, 2016 after a short battle with cancer.

David followed his passion for politics after graduating with a B.A. Honours (Political Science), University of Alberta (1971), Edmonton, Alberta. After serving a short time as a policy analyst under the government of Peter Lougheed David decided to move east.

David was fully bilingual and held different positions with the Federal government. In 1983 David returned to Queen’s University, Kingston, Ontario to lecture while he worked to complete and publish his thesis paper “Aboriginal Constitutional Negotiations”

David was known best professionally for his superior negotiation skills, written communication and a remarkable ability to bring meaning to statistical data.

As a person David will be best remembered for his generosity and infinite capacity to love. He loved and took exceptionally good care of three dogs (Nanook, Atim and Chinook) as well as countless cats, fish and one gerbil.

In lieu of flowers, and in memory of David, please consider a donation to his niece Brooke’s education fund: https://www.gofundme.com/DavidBoisvert

“The most beautiful things in the world cannot be seen or touched; they are felt with the heart.” — Antoine de Saint-Exupéry, The Little Prince 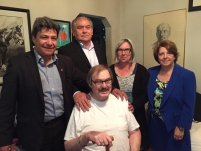