The Métis are one of three distinct Aboriginal peoples of Canada recognized under the 1982 Canadian Constitution. During the Fur Trade (1670-1870), the Métis were known to be fiercely independent and instrumental in the development of western Canada.

The word Métis comes from the Latin term “miscere” (to mix) and was used initially to describe the children of Native women and French men. Over time, the word “Métis” became the accepted term attributed to all children born to Native women and European men.

In 1670, King Charles II of England granted a Charter to the Hudson’s Bay Company for “the sole trade and commerce of all those seas, streights, bays, rivers, lakes, creeks and sounds … and all mines royal … of gold, silver, gems and precious stones to be found, and that the said land be from henceforth called Rupert’s Land.” The vast territory was named after Prince Rupert of Rhine, a cousin of Charles II, and the first appointed Governor of the Hudson’s Bay Company. The Métis quickly became the intermediaries between European and Indian cultures; working as guides, interpreters, fur traders and provisioners to the new forts and trading companies. Métis villages sprang up along the riverways from the Great Lakes to the Mackenzie Delta. The Rupert’s Land territory included all or parts of present-day Northwest-Nunavut Territory, Ontario, Manitoba, Saskatchewan, Alberta and British Columbia, and became known to the Métis as the “Métis Homeland.”

Métis culture is a fusion of French, English, Scottish and Indian influences, and took root and flourished in the late 1800s. The Métis developed a unique language called Michif, using both Indian nouns, and English or French verbs. Métis fiddlers combined jigs and reels into their unique forms of dance and music. Métis women created intricately decorated attire included woven sashes, embroidered gun sheaths, deer hide caps, quilled and beaded pipe bags, and the capote, a European-style coat made from Hudson Bay point blankets. The sale of these items often contributed to the income earned by the Métis family.

The Métis developed technologies for moving freight, such as the Red River Cart and York boat, and were known to elect Councils to organize highly successful buffalo hunts. From the buffalo meat the Métis provided pemmican to the fur trade, a remarkable energy-giving food, which in great measure, is responsible for the first crossing of the North American continent and explorations of the far northwest. By 1816, the Métis had challenged the Hudson’s Bay Company’s monopoly of the fur trade, and began to develop a political consciousness and a collective sense of community and nation-hood.

By 1869, the Métis formed the majority of the population at the Red River Colony near present-day Winnipeg, and developed a unique political and legal structure. Led by Louis Riel, the Métis established a provisional government and negotiated the entry of Manitoba into Canadian Confederation in 1870. However, federal promises of land under the Manitoba Act were not fulfilled, and after 10 years of delay, the government introduced the “Scrip” system. Scrip certificates, which came in the form of land-or-money Scrip, replaced direct land grants and were issued to some but not all Métis. Land speculators who followed the Scrip Commission offered to buy up Scrip from the Métis who were already destitute from the decline of the fur trade and buffalo herds. The Scrip system under contemporary review and research shows unscrupulous, fraudulent activity, and unchecked abuse of the system, and is a tragic era of Métis interaction with land speculators.

The Royal Proclamation of 1763 had made the Crown responsible for the well-being of Aboriginal peoples and forbid the dismembering of their lands. Despite this declaration, the federal government did not acknowledge its responsibilities for the Métis, and refused to recognize their rights as a sovereign people over Rupert’s Land territory.

Impoverished and frustrated, the Métis sent Gabriel Dumont to appeal the Métis cause to Louis Riel, and in 1885, Riel and Dumont led an armed resistance in northwestern Saskatchewan, near the Métis settlements of Duck Lake and Batoche. Despite support from local farmers and the Blackfoot and Cree Indians, the Canadian army was able to crush the resistance at a final battle in Batoche. While Dumont eluded capture, Riel and those that fought alongside him, were arrested and tried. Louis Riel was executed by “hanging” in Regina on November 16, 1885.

By the 1930s, associations to lobby for a land base were formed in Saskatchewan and Alberta and by 1938, the Alberta government set aside land and formed 12 Métis “colonies” for the most destitute of the Métis. In 1990, Alberta granted 1,280,000 acres of land for the establishment of eight Métis settlements; a precedent that allowed the contemporary Métis living on these settlements to obtain a legislated land-base, limited control of housing, health, child welfare and other legal institutions.

The 1960s saw the re-emergence of Métis under renewed political organizations, and during the First Ministers talks leading up to the Canadian Constitution in 1982, the Métis were at the table and negotiated Métis inclusion in the Constitution as one-of-three distinct Aboriginal peoples of Canada.

In 1992, Louis Riel was recognized as one of the Founding Fathers of Confederation and a monumental statue of Riel was unveiled on the grounds of the Manitoba legislature in 1996, consistent with the general area in which many of the historical events surrounding Riel took place.

Indigenous and European relations in the fur trade economy of the historic Northwest (1670-1870) produced the “Bois Brûlé”, who were a formidable force of hunters and fur traders who engaged in business with the Hudson’s Bay Company and the Northwest Company. Over time, the “Bois Brûlé” developed kinship with a distinct cultural, political and collective identity which led to their open declaration that they were the Métis Nation. Led by Cuthbert Grant, their long-standing dispute with Lord Selkirk and encroaching settlers at the Red River Settlement gave immediate entry into the political arena over Métis land rights, ending in the Battle of the Frog Plain in 1816 (commonly known as the Battle of Seven Oaks).

After 1821, the diminishing fur trade transitioned some Métis into buffalo hunters, supplying buffalo hides and pemmican to the Hudson Bay Company while they explored entrepreneurial skills and trade experience outside the boundaries of Rupert’s Land territory including parts of the (northern) United States. The freedom and mobility of the Métis Nation expands its traditional territory beyond the Rocky Mountain watershed and makes it difficult to illustrate an agreed map depicting the Métis Nation Homeland beyond Rupert’s Land boundaries.

For greater certainty, the Homeland of the Métis Nation extends beyond the illustration of Rupert’s Land boundaries.

The National Definition of Métis

In September 2002, the Métis National Council adopted the following definition of Métis: 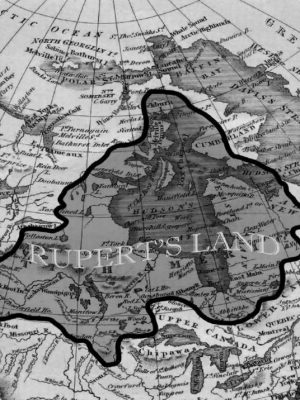